Please Note: All prices displayed are Ex-VAT. 20% VAT is added during the checkout process.

Juniper Networks QFX10002 line of fixed configuration switches offers 72-port and 36-port 40GbE options in a 2 U form factor, with support for 10GbE and 100GbE. Both switches support quad small form-factor pluggable plus transceiver (QSFP+) and QSFP28 ports for 40GbE and 100GbE speeds, respectively. With support for 10GbE, 40GbE, and 100GbE in a single platform, the QFX10002 switches provide the foundation for today’s data center, delivering long-term investment protection for current and emerging requirements.

Built on custom, Juniper-designed Q5 ASICs, the high-performance, highly versatile QFX10002 switches scale from 2.88 Tbps to 5.76 Tbps of throughput. Additionally, by offering the industry’s highest 100GbE port density-up to 24 in a 2 U fixed form factor- the QFX10002 enables a simple, consolidated network design and allows customers to seamlessly evolve data center networks from existing 10GbE and 40GbE architectures to 100GbE to keep pace with evolving needs.

The QFX10002 is a member of the QFX10000 line of Ethernet switches, which can be deployed in a number of different network designs and fabrics, including Layer 3 fabric and multichassis link aggregation (MC-LAG) for Layer 2 and Layer 3 networks, giving customers complete architectural flexibility. Additionally, the open architecture ensures that customers can innovate on top of Juniper Networks Junos® operating system to accelerate their pace of innovation.

The QFX10002 line includes two fixed 2 U switch models, each providing wire-speed packet performance in 10GbE, 40GbE, or 100GbE speeds. Both switches provide a rich set of Junos OS features. In addition to a high throughput Q5 ASIC, the control plane performance on all QFX10002 switches is further enhanced with a powerful 2.5 GHz quad core Intel CPU and 16 GB of SDRAM.

The QFX10002 switches are built with Juniper custom Q5 ASICs, which offer industry-leading performance and scale with 1 Tbps of switching throughput and support for network virtualization with VXLAN, Ethernet VPN (EVPN), and MPLS. The Q5 ASIC is 400GbE-ready and embedded with an on-chip analytics capability, along with a precision timing protocol and highfrequency monitoring. 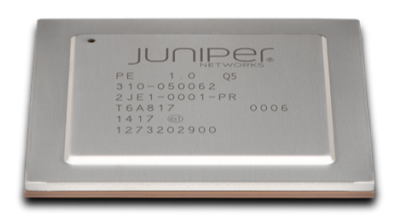 QFX10000 switches support a diverse set of deployment options, including L3 fabric and L2 and L3 networks with MCLAG. Customers can choose the architecture that best suits their deployment needs and easily adapt and evolve as requirements change over time. The QFX10002 switches serve as the universal building block for all of these switching architectures, enabling data center operators to build cloud networks their way.

The QFX10000 switches run the same Junos OS used by all other Juniper Networks EX Series and QFX Series Ethernet Switches, as well as the Juniper Networks routers that power the world’s largest and most complex networks.

By using a common operating system, Juniper delivers a consistent implementation and operation of control plane features across all products. Junos OS employs a highly available modular architecture that prevents isolated failures from bringing down an entire system. Key Junos OS features that enhance the functionality and capabilities of the QFX10000 switches include:

The QFX10000 switches have an open software architecture that enables customers to innovate along with Juniper to accelerate the pace of innovation. Customers can create and run applications alongside Junos OS; these applications can then follow their own software release schedule.

This new solution offers modularity and direct programmability through APIs. The platform and Packet Forwarding Engine (PFE) modules are separate from the control module(s). Customers can create and run guest applications, either as a VM or a Linux process (daemon), alongside Junos OS. They can also communicate with Junos OS as well as directly with platform and PFE modules through normalized programmable APIs. Having the ability to build applications that can program the QFX10000 control plane, data plane, and the platform itself, customers can implement specific and unique network forwarding functions and automate the control and management by integrating with their own SDN controller and orchestration tools. The QFX10000 programmable APIs have a stable abstraction so that the customer’s applications can work across Juniper platforms as well as future Junos OS releases. Based on Apache Thrift, the QFX10000 switches support standardized API definition via Interface Description Language (IDL), while allowing users to employ their favorite programming language.

Other services such as analytics and automation can also run as separate processes (daemons) and can be directly accessed through orchestration tools. 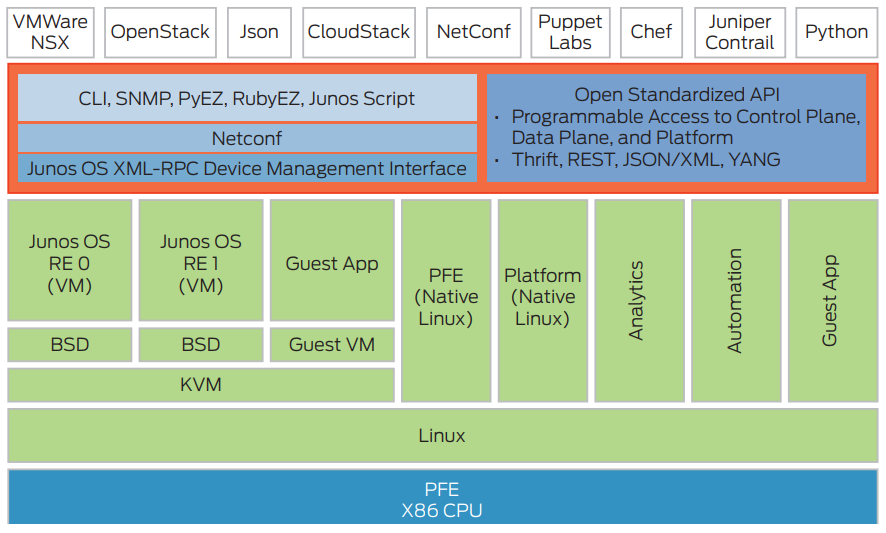 For cloud deployments, Network Director provides a set of REST APIs that enable on-demand and dynamic network services by simplifying the consumption of services for multitenant environments. With third-party cloud orchestration tool integration, the Network Director API enables automation and provisioning of L2, L3, and security services in the data center without the need for manual operator intervention.

The QFX10000 switches support a Virtual Output Queue (VOQ)- based architecture designed for very large deployments. VOQ refers to a queue on the egress port that is maintained by the ingress PFE. With VOQ architecture, packets are queued and dropped on ingress during congestion with no head-of-line blocking.