Please Note: All prices displayed are Ex-VAT. 20% VAT is added during the checkout process.

Fully configured, a single EX9253 chassis can support up to 144 10GbE ports (all at wire speed), delivering one of the industry's densest line-rate 10GbE port densities for this class of feature-rich and programmable switch. The EX9253 switch is capable of delivering up to 2.4 Tbps per slot.

EX9250 switches offer Evolved Enterprise Core capabilities that allow the creation of larger networks supporting both Layer 2 and Layer 3 application traffic. An Evolved Enterprise Core is enabled by combining technologies such as EVPN and Virtual Extensible LAN (VXLAN). EVPN uses control plane-based learning to ensure efficient network utilization and natively supports active/active multihoming. VXLAN overlay with EVPN allows L2 connectivity across the network while providing active/active redundancy, aliasing, and mass media access control (MAC) withdrawal. In an Evolved Enterprise Core, the provider edge (PE) switch/router can, in most cases, also use a VXLAN L3 gateway and route between VXLAN segments when required. Since the core is a standard IP network, EVPN/VXLAN allows the creation of an evolved core without having to replace the rest of the core infrastructure. Enabling an evolved core with EVPN provides flexibility by integrating with Junos Fusion and other technologies in the distribution/access layer, paving the way for a broader EVPN deployment over time.

The EX9250 line of switches is designed with simplicity in mind to enable the Self-Driving Network™, with the goal of detecting and correcting network faults and anomalies before services or customer experiences can be impacted. The following capabilities, integrated into the EX9250 switches, make this possible.

The EX9250 line delivers a number of common architectural elements across its campus distribution and core Ethernet switches. The REs employed by these switches run Junos OS, which processes all L2 and L3 protocols and manages the chassis. The EX9251 switch and the EX9253 line cards include Packet Forwarding Engines (PFEs) that process network traffic.

The EX9251 is designed for small enterprise campus deployments. The switch's shallow depth makes it ideal for wiring closets and distribution facilities. To maintain uninterrupted operation, redundant variable-speed fans cool the system, as well as the RE and PFE. Redundant hot-swappable power supplies convert building power to the internal voltage required by the system.

The EX9253 is designed for medium-sized enterprises, with efficient multicast replication handling and deep buffering to ensure performance at scale. To maintain uninterrupted operation, trays with redundant, variable-speed fans cool the line cards, RE, and PFE. The EX9253 power supplies convert building power to the internal voltage required by the system. All EX9253 components are hot-swappable, and all central functions are available in redundant configurations, providing high operational availability and ensuring continuous system operation during maintenance or repairs.

Junos Fusion Enterprise technology enables a large number of devices deployed throughout a building to be managed as a single, logical device, reducing network complexity, simplifying network management, and lowering operational costs. Using Junos Fusion Enterprise, network administrators can connect up to 128 EX4300, EX3400, or EX2300 Ethernet access switches to one or two EX9250 Ethernet switches serving as aggregation platforms, creating a high port-density device that appears to the larger network as a single switch. In a Junos Fusion Enterprise deployment, the EX9250 aggregation switches serve as the single point of management that runs Junos OS and is responsible for configuring, monitoring, and maintaining all devices in the topology (see Figure 1).

The Routing Engine used by the EX9250 line of switches is based on the same field-proven hardware architecture used by Juniper Networks routers, bringing the same carrier-class performance and reliability to the EX9250 that Juniper routers bring to the world's largest service provider networks. The RE's central CPU performs all system control functions and maintains hardware forwarding table and routing protocol states for the switches.

Both the EX9251 and EX9253 feature AUX, console, and Ethernet ports on the front panel to support out-of-band system management and monitoring, while an external USB port accommodates a removable media interface for manually installing Junos OS images.

All EX9250 switches support both AC and DC power supplies; however, AC and DC supplies cannot be mixed in the same chassis.

When deployed in a multichassis link aggregation (MC-LAG) configuration in the campus, the EX9250 switches-working in conjunction with Juniper access layer switches like the EX4300, EX3400, and EX2300-eliminate the need for Spanning Tree Protocol (STP) and collapse the core and aggregation layers, dramatically simplifying the network architecture and network operations.

Similarly, in the data center, the EX9250 switches can be used to collapse core and aggregation layers. When used with Juniper access switches in an MC-LAG configuration, the EX9251 and EX9253 reduce the number of managed devices by more than 50% and eliminate the need for STP.

In combined campus and data center environments, the EX9250 line consolidates network layers to simplify the network architecture and operations. In all scenarios, the EX9250 line of switches delivers a simple, secure, virtualized network environment that increases enterprise business agility.

When serving as core switches, the EX9250 line delivers a number of high availability features that ensure uninterrupted, carrier-class performance in addition to redundant, hotswappable power supplies and field-replaceable fans. Each EX9253 chassis includes an extra slot to accommodate a redundant RE to serve as a backup in hot-standby mode, ready to take over in the event of a master RE failure. If the master fails, the integrated L2 and L3 GRES feature of Junos OS, working in conjunction with the NSR and NSB features, ensures a seamless transfer of control to the backup, maintaining uninterrupted access to applications, services, and IP communications.

The EX9250 line of switches runs the same Junos OS used by all other Juniper Networks EX Series Ethernet Switches, as well as the Juniper Networks routers that power the world's largest and most complex networks.

By using a common operating system, Juniper delivers a consistent implementation and operation of control plane features across all products. To maintain that consistency, Junos OS adheres to a highly disciplined development process that uses a single source code, follows a single release train, and employs a highly available modular architecture that prevents isolated failures from bringing down an entire system. 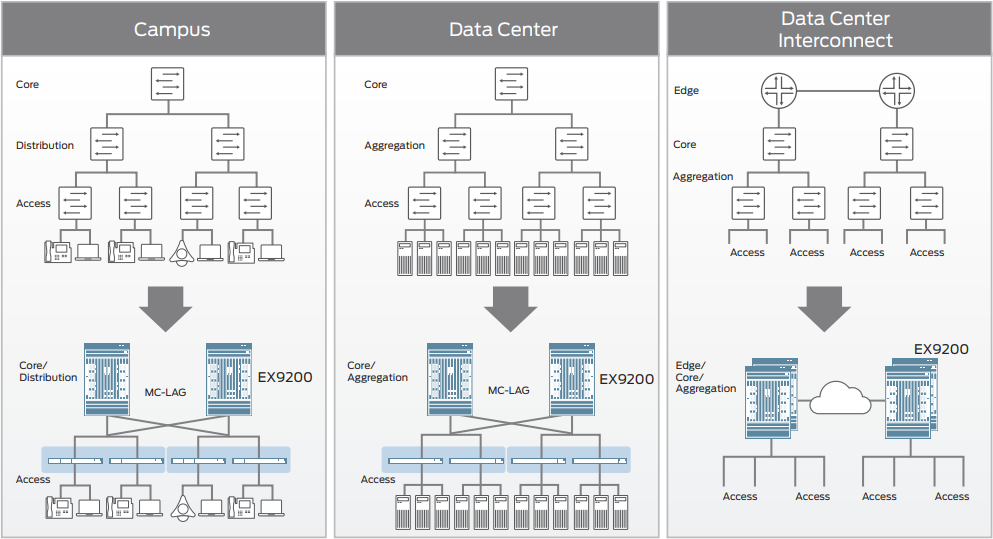 These attributes are fundamental to the core value of the software, enabling all Junos OS-powered products to be updated simultaneously with the same software release. All features are fully regression tested, making each new release a true superset of the previous version; customers can deploy the software with complete confidence that all existing capabilities will be maintained and operate in the same way.

A range of system management options are available for the EX9250 line.

Juniper Networks Junos Space software provides system-level management across all EX Series switches, as well as other Juniper products deployed throughout the network-all from a single console.

Juniper Sky Enterprise simplifies the deployment process by building in a "phone home" capability for branch secure router and switches to eliminate pre-staging and allow all management from a central IT operations center. The simple yet flexible solution uses standard SRX Series firewalls and EX Series switches, allowing customization at the operations center where required.

Defined by IEEE 802.1ae, MACsec provides secure, encrypted communication at the link layer that is capable of identifying and preventing threats from DoS and other intrusion attacks, as well as man-in-the-middle, masquerading, passive wiretapping, and playback attacks launched from behind the firewall. When deployed on switch ports, MACsec encrypts all traffic on the wire but not inside the switch itself. This allows the switch to apply policies such as QoS, deep packet inspection, and sFlow to each packet without compromising the security of packets on the wire.

Hop-by-hop encryption enables MACsec to secure communications while maintaining network intelligence. In addition, Ethernet-based WAN networks can use MACsec to secure links over long-haul connections. MACsec is transparent to L3 and higher layer protocols and is not limited to IP traffic; it works with any type of wired or wireless traffic traversing Ethernet links.